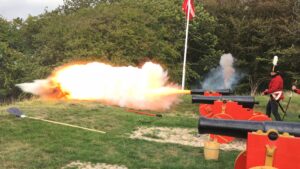 A cannon shot may only take a moment, but the pressure in the stomach and the bang in the ears before the eye makes the huge cloud of smoke appear, gives a shudder and laugh in the faces of the spectators every time.

On Saturday the 7th of August from 3 pm, there will be extra gunfire over Agersø Sound, when both Stigsnæs Coastal Battery and the gunboat Corsør fire with black powder on Stigsnæs.

We have managed to find money for a tugboat, so that the rowers on the gunboat do not have to row all the way from Korsør to Stigsnæs, and the spectators can find places in the large protected area in Stigsnæsskoven, where the ramparts stand as the soldiers left them 200 years ago. 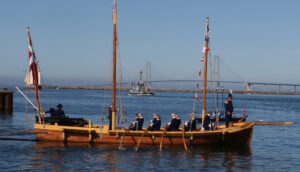 Corsør was launched in 2019 from the shipyard in Korsør, where students at FGU have built it up from the keel according to original drawings. The boat is equipped with 16 oars and equipped with a 24 pound cannon aft and a one pound and a four pound sea bits in front.

It is volunteers who man the coastal battery and Corsør and here in peacetime they do not sail out if the wind is more than eight meters per second. The land-based cannons are fired by almost whatever the wind and weather.

The afternoon begins at 3pm and lasts a good hour.

There are sales of coffee, cake and cold drinks at very small prices from the crew house.

The gunboats and cannon batteries along the coasts were an important part of the struggle to keep Denmark together during the English war.

At that time, the English warships patrolled the Great Belt to secure trade routes between the Baltic Sea and the rest of the world.

The English also tried to prevent the Danes from coming from Zealand to Funen, and it could take several days of trying to cross from Omø to Langeland.

The Danish king also allowed the gunboats to be used for piracy against the enemy’s merchant ships, so there have been many deadly battles on the water just off our shores.

The English War is the war that has perhaps meant the greatest economic loss for Denmark since we lost the Øresund customs with the loss of Scania, Halland and Blekinge to the Swedes.

Unfortunately, the English War is not very suitable for a TV documentary, because the camera was not invented, and there is not the same documentation for heroic deeds and losses that has made 1864 and the loss of Southern Jutland nationally known.

At the conclusion of the peace in 1814, we lost Norway and thus also the right to Norwegian oil. 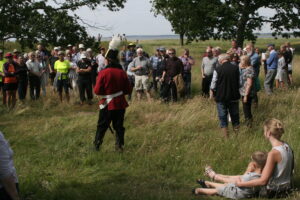 There are still a few free tours left this summer at Stigsnæs Kystbatteri:

A tour takes about an hour depending on the talk and questions along the way. Remember sensible footwear and mosquito repellent. The terrain is uneven and not equally handicap friendly everywhere unfortunately.